When I first arrived in Barcelona, I must admit I was a little disappointed. I had envisioned a colourful city filled with life and music and dancing and great food. However, as the days have gone on, I have grown to love this beautiful, sunny city and all it has to offer.

My first day involved a walk to the Sagrada Familia, but getting nice photos of this fascinating building is particularly difficult due to the construction work constantly going on (fun fact: all the construction work is funded by anonymous donations and the entrance fees taken in by the building). I also ventured up a very very steep hill in 30 degree heat to visit Park Güell, only to find out that the tickets to the monumental site had all been sold out for that day. But, nothing could dampen my spirits, so I bought a ticket for Monday night and headed back into the city centre on an overcrowded bus. In the evening, I walked 40 minutes to a tapas bar that had been suggested by my friend, Danielle. I was so excited as I had heard such great things about this place and I was starving. I checked the opening time on Google and it said 5pm. I got there at about 20 past and it was shut so I was very disappointed but I headed to another tapas bar around the corner which was very good. Only during a conversation with Danielle did I realise that my google was still in UK time and so it really didn’t open until 6pm. I felt like a bit of an idiot but my food was delicious so I couldn’t complain. I struggled to sleep that night as I was going to be skydiving the following day and I was extremely nervous but eventually I got some rest in my very cosy hostel room. 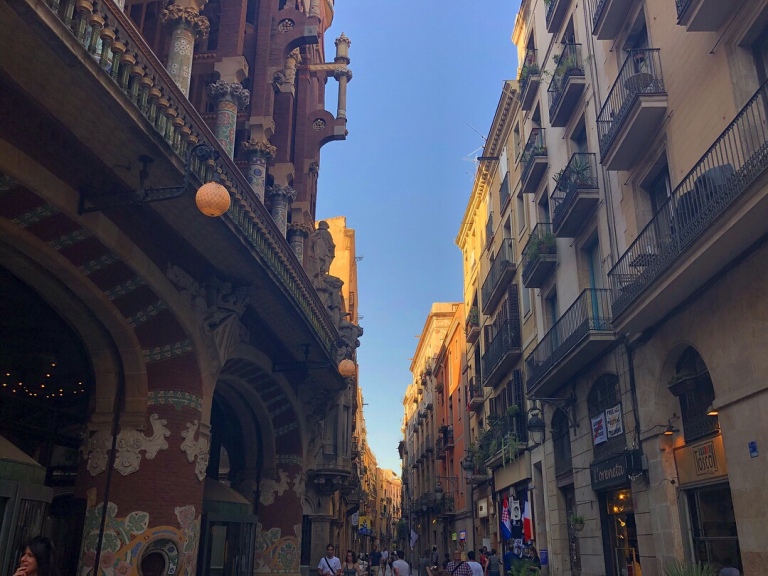 The following day I got up and walked to Plaça de Catalunya to catch a Renfe train/metro (I’m not sure what it actually is) to Manresa station – about an hour and a half from Barcelona – where I would be collected for my skydive. Unfortunately, the phone numbers I was supposed to call when I arrived were unrecognisable and so I began to wonder if I had been scammed but luckily for me someone else was going to the same place so there was a van already waiting! We drove 10 minutes to the skydiving landing zone where I checked in and was told to wait for my instructor. I was extremely nervous but when I finally got into my gear and was chatting away to my cameraman David and my instructor Rab, the adrenaline kicked in. I will be honest though, people keep asking me “was it amazing?” and my only response can be that I actually don’t remember! I remember the feeling of the air in my face and hair but I don’t remember looking down and I don’t remember what my mental emotions were at the time. It’s almost as if I’ve suffered a shock. But it was a great feeling being thrown out into the sky and something I can now tick off my bucket list. I’m also happy to announce that we managed to raise over £800 for Action for Pulmonary Fibrosis. This is a charity close to my heart as I lost my grandpa to this disease in September last year. I wanted to raise awareness of this disease and I thought there was nothing my grandpa would have loved more than to watch me throw myself out of a plane.

When I got back to the city of Barcelona, the final of the World Cup was playing in all of the bars, so I decided to stop and watch the final 20 minutes whilst eating some amazing paella. Though I wished that Croatia had won purely because I am visiting there in a week or two, I feel indifferent towards the result. It was a perfect end to a great day.

On the Monday, I didn’t have any plans and was at a bit of a loss as to what to do with myself. So I decided that I would catch the hop-on hop-off open top tour bus and learn a little about Barcelona. I also realised that I could take this bus to Park Güell for my rescheduled time. On my route I decided to hop off at the Montjuïc cable car and take a ride up to the castle to see the views from the hill top. The landscape was stunning from up there, especially looking across the Mediterranean. This was probably the highlight of my time in Barcelona as shocking as that may be. Park Güell was lovely in the evening but not quite what I had hoped.

And today, on my final day, I found the most amazing pasta bar called Macchina for lunch, right around the corner from my hostel. So good in fact that I almost went back for my dinner. It was very close by to the cinema and I planned on going to watch Ocean’s 8 (which I really enjoyed btw!) then relaxing the rest of the day. I had a couple of hours to kill before the movie started though, so I got some amazing leche merengada flavoured gelato (which I wrongly translated as lemon meringue – again I’m an idiot) and I was pleasantly surprised. I then chilled out reading game of thrones in a cute little cafe.

Barcelona, it has been a strange delight and I suppose I will have to come back here one day if for no other reason but the Macchina pasta bar. Off to Prague we go.

One thought on “BARCELONA, SPAIN”